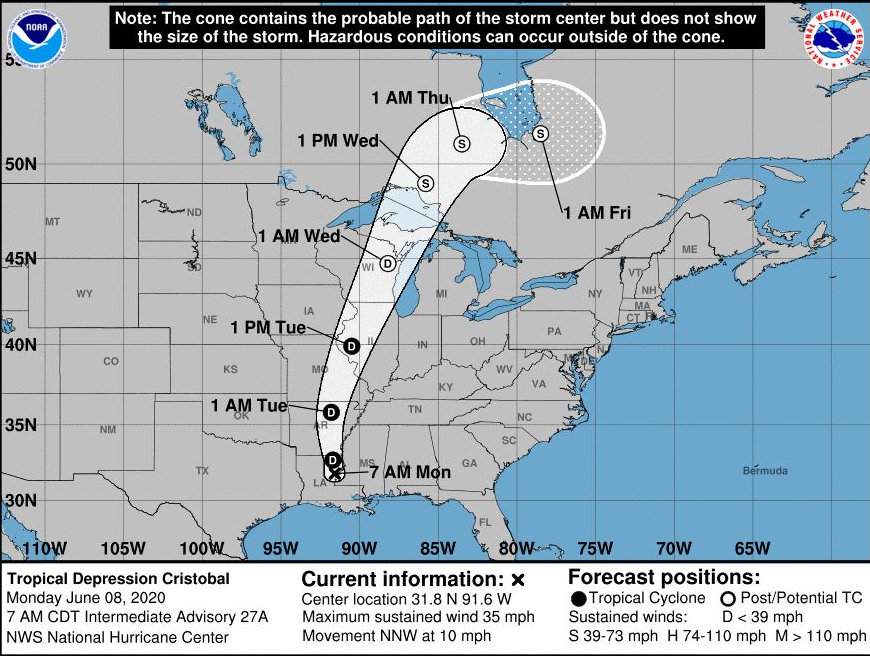 As of Tuesday, June 8 at 9:00 PM, Cristobal remained a Tropical Depression over central Wisconsin. Possibly the northernmost tropical cyclone over the Midwest United States in history. Cristobal may regain strength as a post-tropical storm.

*Update June 12, 8:00 AM : Tropical Depsression Cristobal swept north through the Central and Midwest United States and flooding, downed trees, and a swath of power outages in its wake. Hundreds of thousands of utility customers and more than a 1.5 million people were left without power. Outages continue to plague the Upper Midwest and Great Lakes region four days after the storm.

DTE Energy in Michigan expected to restore most customers by end of day Friday and full restoration on Saturday. The utility’s website cited the efforts of “more than 1,000 employees, contractors and out-of-state crews” working to restore power. I&M’s outage map showed that most Indiana customers were restored with 300 still without power. In Ohio, AEP had “Three thousand line, contractor and support personnel” working 16-hour days. Ohio Edison did not have information immediately available.

Tropical Storm Cristobal made landfall in Louisiana with 50-60 MPH winds, storm surge, flooding and power outages. The cyclone weakened to a tropical depression within hours after making landfall. Up to 16 inches of rain fell over parts of Louisiana. Storm Surge warnings were issued for portions of the Gulf Coast east of the storm’s center.

The recently updated 2020 Hurricane Season Forecast calls for 19 named storms including 9 hurricanes and 4 major hurricanes. With an early start to the season and two more systems of interest

Cristobal set records by strengthening to a Tropical Storm on June 2, the earliest “C” named storm ever, and then remaining a tropical cyclone as it traveled further west and north than any previous tropical system in recorded history. As of 4:00 PM CDT, June 9, 2020, Cristobal was centered over Northern Illinois and Eastern Iowa with sustained winds of 30 MPH and higher gusts.

Standby Generator Sizing Guide: How Much Power Do You Need?

The National Weather Service issued flash flood warnings for portions of northern Wisconsin and Upper Michigan with 2 to 4 inches of rain expected with up to 6 inches locally. Winds to 20 MPH with higher gusts. By 9:00 PM Cristobal had moved over central Wisconsin with 40 MPH gusts.

Flash floods and power outages follow the storm as it moves north.

On Monday, June 8, AccuWeather’s forecast indicated that Cristobal would remain a tropical depression until it joined with another storm system near or over Lake Superior. It could regain strength to become a post tropical storm as it passes through Ontario, Canada on its way to Hudson Bay. A new record in any book.

Hurricane Preparedness: Make a Plan for 2020

Tropical Storms Arthur and Bertha formed before the season began. Arthur came within 20 miles of the North Carolina Outer Banks. Bertha made landfall in South Carolina. Cristobal formed in the Bay of Campeche, dwindled over the Yucatan Peninsula, and returned to Tropical Storm status as it moved north across the Gulf of Mexico. Next week, another system currently east of the Caribbean Sea and the Windward Islands has potential for development, but no surety exists that far in advance. If it did organize into a tropical storm, it would be the earliest fourth named storm of the Atlantic Hurricane season on record.

Prepare Your Home for Hurricane Season

An active, early start to the season could allow the formation of more storms. The 2017 Hurricane Season began with a forecast for less activity with the expected formation of an El Niño (warm ocean conditions in the Pacific Ocean) which would lower Atlantic Tropical Activity. However, a La Niña (cooled Pacific Ocean conditions) developed instead. Activity increased in the Atlantic and 2017 became the costliest hurricane season on record with ten hurricanes and six major hurricanes.

If storms continue to form early this year and the weak La Niña forms as expected, 2020 could become another deadly and costly hurricane season.

No one has lower prices on Generac Guardian and Protector Gas, or Briggs and Stratton Home Standby Generators.

Save on Kohler Standby Generators 6kW to 60kW 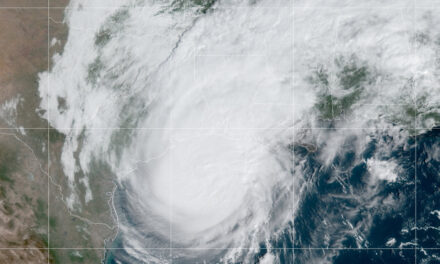 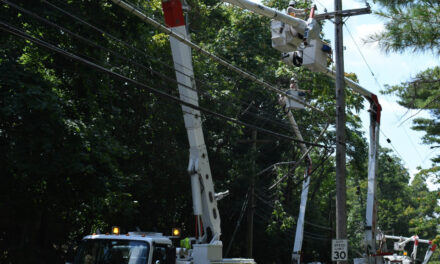